The North Carolina Zoo announces the birth of three litters of critically endangered American red wolves as part of its red wolf breeding program. The litters comprising 12 pups were born during three days from April 28 to April 30. All pups and their mothers are healthy and doing well. This is the first time in the Zoo’s breeding program that three litters were born in one spring.

The newest pups bring the number of red wolves currently in the Zoo's breeding program to 36, making it the second-largest pack in the U.S. after Point Defiance Zoo and Aquarium in Tacoma, Washington.

Only 15-20 red wolves remain in the wild, and they're all in eastern North Carolina. They're considered the most endangered canid in the world.

For the first time in two decades, one of the litters was born on the red wolf public habitat, giving Zoo guests a rare chance to view the pups for a limited time. The pups most likely will be visible starting in mid-June, when they begin to venture outside of the den. The wolf family will be moved to the non-public breeding area when the pups are older and weaned from their mother. The other two litters were born in non-public viewing areas of the Zoo.

The parents of two females born April 28 are Denali (male) and Ayita.

The parents of two males and two females born April 30 are Solo (male) and Taylor.

The parents of six pups – two males and four females born April 30 - are Flint (male) and Sassy. This is the pack born on the public habitat.

The Zoo will be announcing a public naming poll for one of the litters within the next month.

"Congratulations to the North Carolina Zoo for playing an essential part in the survival of this critically endangered species," said Secretary Reid Wilson, N.C. Department of Natural and Cultural Resources. "These births are important because many of our wolves, once matured, have been moved to other breeding packs to continue to help bring this species back from near extinction. Our hope is that more and more red wolves can soon be placed into the wild."

Once common throughout the southeastern United States, the wolves were driven to near extinction during the late 1960s, but the U.S. Fish and Wildlife Service began an aggressive conservation effort – the American Red Wolf Recovery Program – that led to new ways to track and protect the species. Those efforts led to increasing numbers of wild red wolves in eastern North Carolina, but changes in how the recovery program was managed have resulted in the wild population again plummeting in recent years.

The Zoo has been part of the American Red Wolf Recovery Program since 1994. The Zoo's red wolf pack has successfully bred 48 wolves since the program began.

The North Carolina Zoo led the successful efforts to have the American red wolf become part of the Association of Zoo and Aquariums SAFE (Saving Species From Extinction) program.

Under this program, the Zoo leads in conserving the species and growing the wild population and the animals under human care.

To learn more about the North Carolina Zoo and our red wolf program, please visit www.nczoo.org

At the North Carolina Zoo, we celebrate nature. As the world's largest natural habitat Zoo, we inspire a lifelong curiosity about animals for the hundreds of thousands of people who visit our Zoo each year. Our dedicated team of experts provides exceptional, compassionate care for the more than 1,800 animals and 52,000 plants that call our Park home. We also lead efforts locally and globally to protect wildlife and wild places because we believe nature's diversity is critical for our collective future. The North Carolina Zoo invites all of our guests to witness the majesty of the wild in the heart of North Carolina and welcomes everyone to join in our mission to protect nature's diversity. Visit NCZoo.org to begin your life-changing journey.

The N.C. Department of Natural and Cultural Resources (NCDNCR) is the state agency with a vision to be the leader in using the state's natural and cultural resources to build the social, cultural, educational and economic future of North Carolina. NCDNCR's mission is to improve the quality of life in our state by creating opportunities to experience excellence in the arts, history, libraries and nature in North Carolina by stimulating learning, inspiring creativity, preserving the state's history, conserving the state's natural heritage, encouraging recreation and cultural tourism, and promoting economic development. 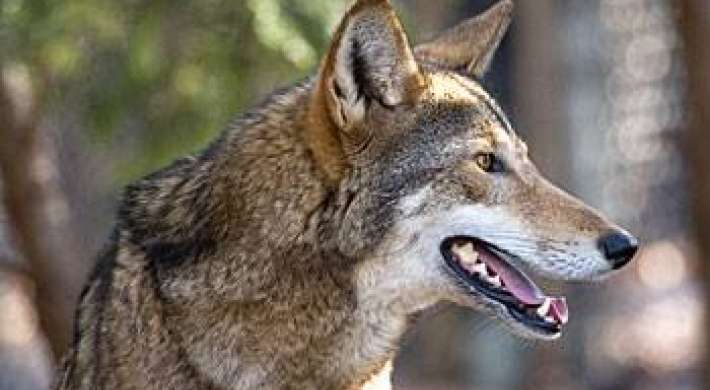 Carolina Canid Conservation: What is an American Red Wolf?

My dream is to never have anyone have to ask, “What is a red wolf?” ever again.

Did you know the only place you can see American red wolves in the wild is in northeastern North Carolina? Learn more about red wolves.