At the North Carolina Zoo, conservation is at the heart of what we do. We believe that the animals you see at the Zoo are ambassadors for their counterparts in the wild and that all our staff have a role to play in wildlife conservation. Thanks to the leadership and hard work of zookeepers and other staff across the Zoo, thousands of dollars have been raised to support wildlife conservation. Behind the scenes tours and other new programs are helping to save the wild cousins of the animals that live here at the Zoo. Here are a few examples of ways our staff are making a difference for saving endangered species from extinction.

Polar Bears International (PBI) is the leading polar bear conservation group in the world. They work to conserve polar bears and save the sea ice the bears depend on. Since 2009, the Zoo has supported four keepers, two volunteers, and two educators to attend PBI’s Climate Alliance Workshop in Churchill, Manitoba, which is considered the polar bear capital of the world due to the significant population of bears that migrate through the area.

The Zoo is also among an elite group of 40 zoos, aquariums, and museums that partner with PBI as an Arctic Ambassador Center (AAC). With this partnership, the Zoo participates in actions which promote climate change awareness, such as tree planting at local parks and schools, facilitating workshops at colleges, and presenting the “Paw of Approval” awards to North Carolina businesses with green practices that work to mitigate the impact of climate change.

In 2019, educators from AAC’s around the country met for the Climate Alliance Workshop. Emphasis was placed on how to engage in productive conversations about climate change with the help of evidence-based communications methods from the National Network for Ocean and Climate Change Interpretation (NNOCCI). This specialized training has been implemented in 184 institutions from 38 states. Creating a framework using universal values, explanatory metaphors to more clearly explain how climate change works, and community level solutions, the Zoo reaches more than 45,000 people annually through presentations at the North Carolina Science Teacher Association Conference, our Living with Nature Distance Learning Events, Facebook Live videos, and in-person interactions.

As an AAC, North Carolina Zoo also participates in outreach programs that promote sustainable practices within the Zoo and within local community entities such as grade schools, community colleges, universities, local businesses, libraries, and the YMCA. These outreach programs consist of reusable bag giveaways and recycling presentations, reusable water bottle giveaways, water conservation presentations, and energy efficiency campaigns that help empower individuals to make a positive impact at home. We organize annual tree plantings that help us beautify the community while educating participants about the important role that trees play in cleaning the air we breathe and reducing our carbon footprint. We also strive to facilitate continual improvement of environmental practices within the Zoo and within our own homes.

From Behind the Scenes into the Wild

Keepers at the Zoo work hard to care for our animals and ensure excellent guest experiences. One aspect of their work is behind the scenes tours, which generate funds that primarily support the Zoo’s conservation programs, but that also provide support to external conservation organizations selected by the keepers. Recently supported organizations include the Zoos Victoria Bushfire Emergency Wildlife Fund, which provided emergency veterinary care to animals impacted by the Australian bushfires, the Philippine Eagle Foundation, which conserves the Critically Endangered Philippine Eagle, and the Orianne Society, which conserves reptiles and amphibians across the eastern United States.

Keepers at the Zoo also provide hands-on support to conservation organizations as and when needed. Most recently, they have helped support partners in Madagascar and South Africa.

The Zoo assisted Madagascan authorities when they intercepted an illegal wildlife smuggling operation involving nearly 10,000 Endangered Madagascan radiated tortoises. The size and scope of this wildlife confiscation was beyond the abilities of local responders and conservation groups in Madagascar, so an international operation was mounted by AZA members. The Zoo contributed a three-person team, with each member contributing unique skills to the response effort: a veterinary resident participated in the tortoises’ health assessment and medical care; an animal care supervisor set up animal care routines to house, feed and monitor the tortoises; and a member of the Zoo maintenance team helped develop infrastructure to provide housing and secure facilities for such as large group of confiscated animals.

In January 2019, 1,800 lesser flamingo chicks were abandoned by their parents because of severe drought near the breeding area, Kamfers Dam in South Africa. The abandoned chicks were rescued and sent to zoos and wildlife centers across Africa. Zoo staff joined other zoo professionals in Africa to care for the chicks, where they prepared formula, hand fed the chicks, cleaned enclosures, and bathed and weighed the 115 chicks housed at their location.

The American Association of Zoo Keepers (AAZK) is a non-profit, volunteer-led organization made up of professional zookeepers and other interested individuals. The mission of AAZK is to advance excellence in the zookeeping profession, foster effective communication that is beneficial to animal care, support deserving conservation projects, and promote the preservation of natural resources and animal life. To increase its impact and reach, the AAZK has several local chapters, including one here in North Carolina. A primary goal of the AAZK’s North Carolina Chapter (NC AAZK) is to raise money for conservation programs we are passionate about. Keepers at North Carolina Zoo accomplish this by participating in two national fundraising events—Bowling for Rhinos and Chopsticks for Salamanders, as well as several local initiatives led by keepers from the North Carolina Zoo. 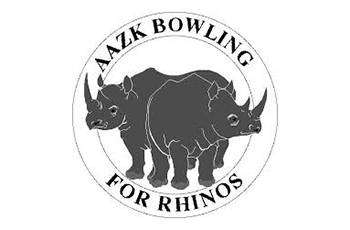 Bowling for Rhinos (BRF) is an annual event held across North America to raise funds in support of the Lewa Wildlife Conservancy, International Rhino Foundation, and Action for Cheetahs in Kenya. NC AAZK has hosted a BFR event every year since 1990 and has raised over $180,000! Collectively, chapters like ours across the nation have raised more than $8 million since 1990!

Chopsticks for Salamanders began in 2011 to promote forest stewardship and salamander conservation. The main aim of this event, held in partnership with the Foundation for the Conservation of Salamanders (FCSal), is to encourage the use of re-usable chopsticks, which in turn will reduce pressure on wild salamanders from deforestation for production of disposable chopsticks. In addition, the program also raises awareness of the threats faced by salamanders living along the Appalachian Mountain Range, from Alabama to Canada, an area which boasts the highest diversity of salamanders in the world!

The NC AAZK’s flagship event is the Run Wild! 5K, held in June every year. Funds raised from this exciting run on the Zoo’s grounds are used as the Chapter’s budget for the following year. Most of the budget is dedicated to supporting two local and two global conservation groups voted on by Chapter members. Some funds are also used to support professional development for members or to supplement the budgets of other zookeeper programs, such as BFR and activities during the National Zookeeper Week. More information on these and other NC AAZK programs can be found on the Chapter’s Facebook page.

Did you know polar bears can sniff out a seal from 20 miles away? Learn more about polar bears. 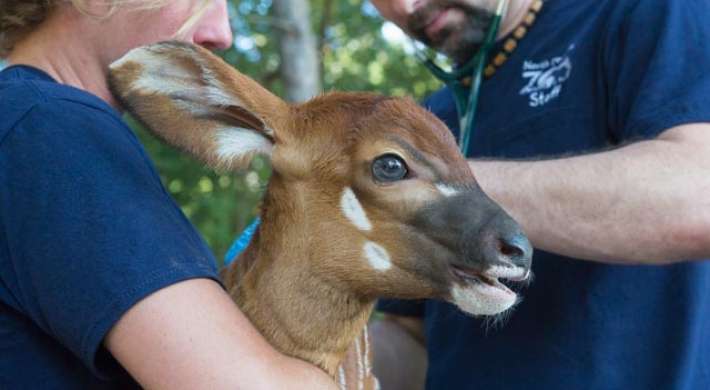 The North Carolina Zoo and NC Zoo Society are supporters of Wild Welfare, an organization with a mission to improve the welfare of captive wild animals around the world.

The animals at the North Carolina Zoo are ambassadors for our conservation efforts abroad, where we work closely with local protected area staff, communities, and other leading conservation organizations to save animals from extinction.

The North Carolina Zoo is committed to protecting North Carolina's native wildlife populations and natural habitats. We preserve over 2,800 acres of land and protect several of native flagship species.