Did you know that North Carolina has more salamanders than anywhere else in the world?  The Appalachian region is a salamander biodiversity hotspot, and we are lucky enough to have more than 60 species in our state! One of the largest and coolest of them all is the Snot Otter….well, it's known by most as the Hellbender! This large salamander, reaching more than two feet in length, is in the same family as the giant Asian salamanders, known as Cryptobranchids. Their larger Asian cousins can reach five feet long and weigh almost 100 pounds!  Imagine a salamander the size of a teenager. Impressive! 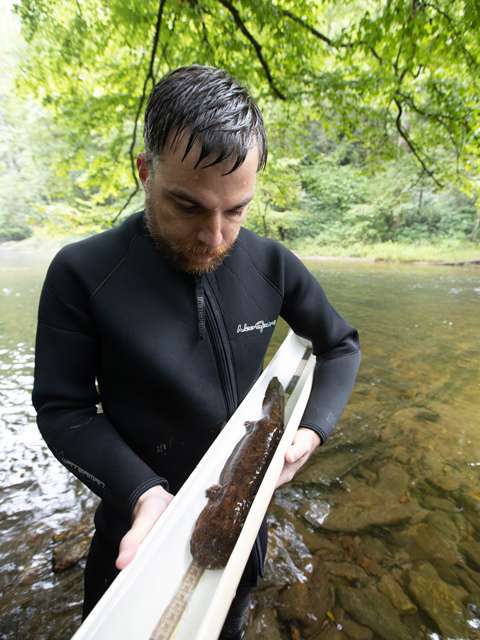 Dustin Smith measuring the length of a hellbender

The North Carolina Zoo has played a crucial role in hellbender research and conservation in  for more than 15 years. When I arrived at the Zoo five years ago, I didn’t want to end that involvement, but we decided to take our efforts in a different direction. We still participate in surveys around the state, which includes visiting rivers where they were known to occur and also looking for new sites.

This includes snorkeling in the water looking for the perfect rock.

That is, a rock they are living under.

They spend most of their time under rocks, but only in clear, high quality streams with lots of oxygen in the water.

We’ve learned that some of their known habitats have degraded over time, and many populations in the state are declining. We definitely don’t want to see any salamander declines, so we can continue to be the salamander capital of the world. So, we’ve looked at the research to determine the next steps….which includes improving their habitats. This step includes building hellbender nest boxes, which were hydrodynamically designed at the University of Missouri to withstand our highly volatile rivers. These concrete nest boxes are about 100 pounds each and offer the hellbenders a safe retreat, breeding site, and perfect spot to rear their young…hundreds and hundreds of little baby hellbenders! 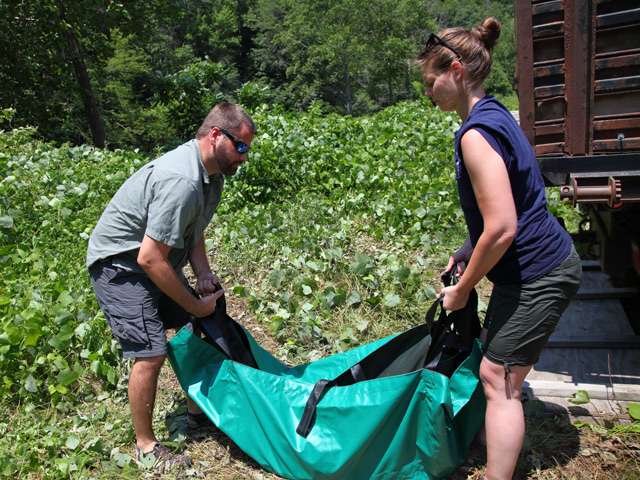 Dr. Graham Reynolds (UNCA) and Katie Hagen moving a box for hellbenders with a sling

But, it's not as easy as just dropping the boxes off in the water. Imagine carrying a 100 pound concrete box down a hill, across slippery rocks, with fast moving water knocking you over...my back hurts just writing about it!

Luckily, we have a dedicated staff and a great partnership helping us with the project. Partners from Tangled Bank Conservation built the boxes, and UNC Asheville and North Carolina Wildlife Resource Commission have been helping us along the way, in the planning stages and by carrying heavy boxes to the rivers.

This project is still in its early stages. While we have been working on it for a couple years at a site north of Asheville, we’re moving a bit closer to home. We are reinstalling the boxes at a site where hellbenders have been studied for more than a decade and there is a robust population. Sorry, we can't tell the names of the sites to protect the animals, their homes, and the nest boxes. But, if you are interested in seeing the process, check out this video we made with Untamed Science – here.

We hope to report back to everyone about our success in the near future. What does success look like? Once the boxes are installed, we will monitor them at least once per month, which includes collecting a lot of river data. But, we hope to observe hellbenders using the boxes as refuge throughout the year. We really hope to find eggs during their Fall breeding season. If those events occur, even if it takes a couple of years, then we would consider it a success. But, it won't end there. This is a long-term project, so we are planning to monitor this location for years and eventually help other partners expand to duplicate this effort in other areas of the state. Eventually, we hope to use this technique to expand hellbender populations and reverse the decline.